Mankind invented the wheel for three reasons: To move. To go fast. And to get away. We realized how boring it was to sit, stand and walk around in a single setting — and we likely needed a better way to escape, unharmed, when confronted by large animals or spear-chucking intruders. (The run! quick! hide! the approach probably only worked on rare occasions.) 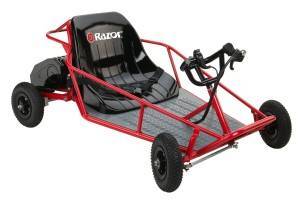 And so our ancestors set out to create a way to go as far and as fast as we possibly could without using our feet. And in the decades and centuries since, we’ve come up with some pretty cool ideas. The sports car. The motorcycle. The SUV.

But these machines are all for adults. What about the children? Sure, bikes are fun, but they don’t go very fast. And you still have to use your feet — what a bummer. No, what kid kind needs is a true blue vehicle. Four wheels. A throttle. Brakes. An actual motor.

Enter the Razor Electric Dune Buggy, your kid’s new favorite way of getting around. We wrote this Razor Dune Buggy Review to tell you what it’s all about…

If you’ve read any of our other reviews, you probably know what’s coming in terms of the Razor Dune Buggy’s age range. Yes, on the official website it says that the Razor Electric Dune Buggy was designed for kids aged eight years and up. But, as with many other products, we’ve come across multiple parents who’ve let their four and five-year-olds ride it around with few, if any, unwanted outcomes.

Basically, it all boils down to responsibility. If you know your child and you think that they’re capable of handling the speed and the controls of the Razor Dune Buggy, no matter their age, then, by all means, don’t let the emboldened 8+ age range on the website deter you from making a sound decision. (And don’t just take our word for it. Here’s what it says in the manual, “A parent’s decision to allow his or her child to ride this product should be based on the child’s maturity, skill and ability to follow rules.” It’s written in bold type too, so you know it’s legit.)

Also, if you’re worried about weight, the Razor Dune Buggy can hold up to 120 pounds.

IMPORTANT PRODUCT NOTE
If you’re still on the fence about the age range, it’s also important to note that the maximum speed of the Razor Dune Buggy is fully adjustable. With the twist of an allen wrench — or a hex key, as they’re also commonly called — you can easily modify the throttle so that your little one can’t go over any unsafe speed limits.

It’s not always necessary to reinvent the wheel when tackling safety concerns. Sometimes it’s best to just stick with the well-proven, time-tested methods that we all know to work quite reliably. An adjustable lap belt. A padded bucket seat. A sturdy, 65-pound steel frame — great for keeping the buggy upright on tight turns.

A steering wheel equipped with easy-to-use rear disc brakes. A safety flag that whips around so that mom and dad can keep a watchful eye.

The Razor Dune Buggy comes affixed with all of these features and also has the added benefit of being completely electric, which means no gas or combustibles are used when firing up the motor. Safe and simple.

For kids, if fun were a formula, it might look a little something like this: F = Speed x Speed (and lots of it). But, unfortunately for them, they don’t make the rules. Parents do. And parents are the ones that make products like the Razor Dune Buggy Go Kart — to satisfy their kids and keep them secure.

That’s why, with its high-torque, 350-watt electric motor, controlled by an easy-to-use hand throttle, the Razor Dune Buggy tops out at around 10 miles per hour, which is just fast enough for them to be able to race around and explore at increased speeds whilst maintaining a sense of security and control.

Fast is fun, but it isn’t everything. Sure, 10 miles per hour might not nearly be enough to convince your kid that the Razor Dune Buggy is meant for them. But, once they realize that they can take this thing on grass or on somewhat rugged terrain, then they’ll practically be begging you to buy it — especially once they see that all their friends are relegated to driving around on boring old roads.

With four grooved pneumatic tires and a rear suspension, the Razor Dune Buggy Go Kart is ready to roll, race and ride around on multiple types of terrain. Dirt. Mud. Gravel. Grass. (Keep in mind though that this isn’t an actual dune buggy. If your kid takes it on any truly treacherous adventures — off curbs or through the forest — then it will likely wear down a lot sooner than you — or they — will want it to.)

In addition, the Razor Dune Buggy is powered by a 24-volt rechargeable battery system, which means that it requires an initial charge of up to 18 hours before you and yours can ride it for the first time — so don’t go expecting that out-of-the-box experience on Christmas Day; you might want them to open it on Christmas Eve.

Once it’s fully charged though, the Razor Dune Buggy can vroom and zoom around for at least 40 minutes straight without needing another break. And then, after that, it only takes about 12 hours to charge after each additional use.

FRIENDLY RECOMMENDATION
If you and your kids aren’t quite satisfied with the 40-minute drive time, you might want to consider purchasing another battery so that you and your son or daughter can have at least an hour-plus of Dune Buggy Razor fun at every outing.

Let’s face it. Our kids are a lot like cavemen. One moment they’re the brightest beings on the planet and the next they’re tripping over their own shoelaces. They also have a desire to go, go, go, wherever they want, as fast as they possibly can.

And, with the help of the Razor Dune Buggy, you can give them just what they need, in moderation, all without breaking the bank or having to purchase something crazy or unsafe. We hope you enjoyed this Razor Dune Buggy review and that it will help you to make the right purchase decision.