Anyone who was under the age of thirty in the early nineties will undoubtedly remember one of the greatest video games of all time; Super Mario Kart. Two plumbers, one princess, a mushroom named Toad, a gorilla in a tank top and two baddies on customized go-karts were all that were needed to create the most climactic competition anyone had ever experienced while sitting on the couch.

Ultimately though, there was always something missing. Sure it was fun dropping banana peels on opponents like Yoshi and watching them spin out just before hitting the finish line, but what about the high-speed thrill of actual driving? The wind in your hair? The speed beneath your feet? Trees and bushes whizzing along as you pass them by?

Well now, thanks to Razor, at least the sons and daughters of those of us alive in the early nineties can live vicariously through our kids with the Razor Go Kart.

Ready to get real? Here’s what you need to know…

As with most electronically powered products, manufacturers tend to trend a little more towards the older kids when creating an age range for their riders — likely so that parents can’t complain when they plop their three year olds into the driver’s seat to ill effect. 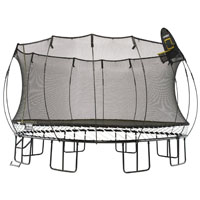 So, with that in mind, this Razor Go Kart is technically built for kids aged eight years and older. But, as a few brave parents have attested to, kids as young as five and six have been able to ride the Razor Electric Go Kart without any problems. So, if you think your son or daughter is responsible enough, and is willing to take the time to understand the controls and grow comfortable behind the wheel of the Razor Go Kart before kicking it into the highest gear, then there’s no reason why you shouldn’t go ahead and take the plunge. (And hey, with a 140-pound weight limit, the earlier you buy the Razor Ground Force Electric Go-Kart, the longer they’ll be able to have fun with it.)

Whoever coined the phrase, “Safety First,” must’ve been a parent. From crawling to walking to riding a bike, to driving around in motorized vehicles, as the world grows larger in our child’s eyes, so do the number of dangers that lurk around its corners. That’s why it’s important to purchase products like the Razor Go Cart, which are designed and constructed with that “Safety First” type of mentality in tow.

First of all, Razor Electric Go Kart come with a bucket seat and a fully adjustable safety belt that straps your kid in via the waist and the shoulders, ideal for abrupt stops and tight turns. Secondly, the Razor Go Kart boasts a rather formidable steel frame, which not only adds to the durability of the product but, at 55 pounds, helps weigh your child down so that the go-kart doesn’t roll over every time they try and take a turn. A hand-operated brake system is also conveniently mounted on the steering wheel for increased control and quick stop-ability.

FRIENDLY RECOMMENDATION
Even if you bought a plastic bubble for your kids to play in, there’s a chance that that bubble could burst and your child could still get hurt. That’s why, as a parent, it’s your duty to make sure that they wear a helmet at all times while riding the Razor Go Kart. “Stuff happens,” as they say. So be prepared. (Kneepads and elbow-pads could also come in handy as well.)

Let’s be honest. You wouldn’t be reading this review if you didn’t want your kids to experience that Super Mario Kart-like excitement of speeding down neighborhood roads and racing around with their friends. But, at the same time, your little one is still little — relatively speaking — and you know that they’re not quite ready for the real deal — four wide wheels on the open road. Nor are you sure that you want them riding around on a loud, gas-powered machine that would disturb the neighbors and could easily go out of control.

Enter the Razor Go Kart, the best of both worlds. With easy acceleration, controlled by your child’s thumb — just like the video game — its high-torque, chain-driven motor is all electric. Powered by two 12-volt batteries, there’s no gasoline and no combustibles. It’s quiet. It’s safe. And, topping out at around 12 miles per hour, it has just enough get-up-and-go for your kids to be able to whip around the cul-de-sac in style.

Safety first. Power. And then performance. We’ve talked about what you need — peace of mind — and what your kids need — speed — but what about the go-kart itself? It might be a machine, but it still needs some love. Let’s take a look at what it requires.

The aforementioned 12-volt battery pack is fully rechargeable. (There’s a charger port located at the back of the Razor Go Kart, right next to its on/off switch.) It takes about 12 hours to fully recharge, and, when it’s full, it can give the go-kart enough vroom, vroom, vroom to ride around for up to 40 minutes straight. (Which is perfect timing as you’ll likely want your kids to be checking in around the hour mark anyways.). Spare batteries are also available, >here.

FRIENDLY RECOMMENDATION
If there is a flaw with the Razor Go Kart, it’s that it isn’t as rugged as most kids would like it to be. That it isn’t to say that the Razor Go Kart is going to break down when driven around the neighborhood — it ultimately prefers pavement — but if your kid takes it off curbs or speeds around on extremely bumpy terrain, it might end up with a cracked battery and a set of broken wheels. So make sure they take care of it. It’ll be money well spent. Or think about buying a Razor dune buggy instead. Just a tip.

Nothing beats reality. Games like Super Mario Kart are extremely fun and entertaining, but your kids deserve better than that. They deserve the real thing, to be under the sun with the wind whipping their cheeks as they race around with their friends. And, with the Razor Go Kart being on the cheaper end of the price line as far go-karts are concerned, you can hardly beat all that it has to offer.

So get real. Talk to your kids. And think about buying one today.

>> Get a nice discount on Razor Go Kart on Amazon<<