Boys will be boys. That’s what they say. They want to go fast. They want to race around on their dirt bikes. They like to look for trouble. But what about girls? Not all daughters like sitting around, reading books, and being boring. Some like to ride around, look cute and meet up with friends.

It’s like Cyndi Lauper says, “Girls just wanna have fun.” And for anyone who remembers Audrey Hepburn in the movie Roman Holiday — or for anyone who’s at least seen the cover of the DVD — they’ll realize that a girl can have just as much fun going fast, racing around, and getting into trouble as their brothers and dads.

So say, “Ciao,” and, “Hello,” to your daughter’s new best friend, the Razor Pocket Mod. This vintage-style, Italian-inspired scooter is the ideal accessory for your pop-star princess and just what she needs to be the speedy little rabble-rouser you know her to be. Let’s begin this Razor Pocket Mod reviews, shall we? 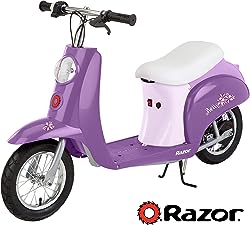 Most websites might tell you that the Razor Pocket Mod Electric Scooter is only suitable for kids aged 12 to 18 years old, but ask any girl who owns one and they’ll likely tell you that they definitely could’ve ridden it much sooner. In fact, we’ve done our research and found that kids as young as 8 years old have been riding around on the Razor Pocket Bike without any difficulty. Not only that, but younger is often better as smaller kids can grow and use it, years after its initial purchase. (Until they surpass the 170-pound weight limit.)

So the next time your daughter insists that she can ride one, she might be right. (But of course, you don’t have to tell her that.)

FRIENDLY RECOMMENDATION:
The Pocket Mod Scooter comes in a wide variety of colors including Betty (light purple), Hot Mod (red), Sweet Pea (pink) and Vapor (black). Look around. Check out your daughter’s room. Try not to snoop. (Looking at you mom!) If you don’t see any pinks or purples, you might want to consider going with another color. Just an idea.

We all want to protect our children. Sentimentally speaking, they are the future. But, more importantly, life is so much easier when you’re NOT spending hours on end in the emergency room waiting on a doctor to mend your child’s broken bones. That’s why it’s important to own products that are both safe and reliable, especially when they’re motorized.

Enter the Pocket Mod Scooter. The 12-inch pneumatic tires and rear suspension make for a smooth and easy ride, over multiple terrains, and the step-through steel frame allows your little girl to position herself comfortably in the seat while having the assurance of a durable chassis beneath her feet. Its twist-grip acceleration control and its hand-operated rear brakes, both located at the peak of the handlebars, also provide for complete control, great for first-time riders.

In addition to the security of the Razor Pocket Bike’s design, it also has the benefit of being totally electric. There’s no gas, no fumes and no combustibles, just a 24-volt rechargeable battery system that does little more than get warm while it’s being used.

When was the last time you heard your son or daughter say that they wanted to take it easy? Relax? Slow things down? If you thought, “last week,” then consider yourself lucky. Most kids like speed. They like to go fast. They get that initial taste of adrenaline after their first roller coaster ride, or after racing down the highway when dad’s late for work, and then all of a sudden they’re different people. Kids like to ride wild, right? 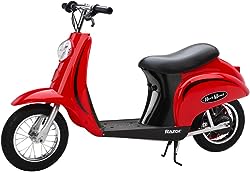 Luckily for you and your daughter, the Razor Pocket Mod Electric Scooter tops out at around 15 to 20 miles per hour — depending on their size — which is just fast enough for her to race around the neighborhood and just slow enough for you to not have to chase her down with your car in case she ever gets a little too overzealous. And, with its chain-driven electric motor, the Razor Pocket Mod scoots around in near silence so you’ll never have to worry about noise complaints from the neighbors when your daughter’s on it every day.

Girls can be very particular about how things look and feel. Colors matter. And so does design. But what about battery life? It’s not something she’ll necessarily think about, right off the bat, but it’s important to know how far she can go before it needs to be recharged. Because trust us, it won’t look cute when she runs out of juice on her way to her friend’s house. And it won’t feel good when she shows up sweaty from having to push the 59-pound vehicle through the neighborhood. So before you let her go, give her the specifics. 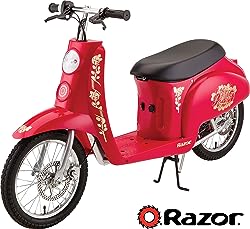 The Razor Pocket Mod can travel up to at least 10 total miles on a single charge, or for about 40 minutes straight without needing a rest.

And then, when she inevitably ignores you and eventually asks — hot and sweaty from wheeling it back home — “How long is it gonna take to recharge? Can I ride it again after dinner?” You can confidently tell her, once she kicks out the kickstand and parks it in the garage that she’ll have to wait at least 12 hours before she can hop back on. (Though it has been known to take as few as 5 after multiple uses.)

UNIQUE FEATURE ALERT:
Not all scooters are created equal. And Razor knows what daughter’s need. That’s why they’ve installed a convenient little storage system beneath the seat. Just lift it up, pack it full and go, go, go. That way, when you’re daughter says that she’s going over to a friend’s house to study, you can at least make sure that she’s bringing her books.

Pros: Razor Pocket Mod Scooter looks g-o-r-g-e-o-u-s, rides very well and comes in different color versions. This little Vespa-like scooter has all electric, amazingly silent motor and is easy to balance while riding. Its hand-operated rear brakes are good and durable, too. What we also liked was an under seat storage which was very convenient.

Cons: Because of the angle, the tires can a bit awkward to pump up. This is a very minor issue though. Other than that, it’s a perfect bike. Well done, Razor!

The Razor Pocket Mod is perfect for pop-princesses, movie stars, and girls aged 8 to 18 who like to turn heads and speed around in style.

>> Click here to check the current price of the Pocket Mod <<