Beginners beware. These 125cc dirt bike reviews are not for you. If you have a young one with little-to-no experience riding dirt bikes or pocket bikes of any kind, proceed with caution. (Or see our review of 70cc bikes or 50cc guide instead.)

If, however, you’re the proud parent of an experienced speed demon, someone who’s shown that they’re responsible on a high-powered, motorized vehicle – preferably a teenager – or if you’re a young adult looking to kick up some dirt and give it a whirl, you’re in the right place.

If you’re in need of a quick recommendation, check out those popular bikes listed below. Clicking on any will take you to Amazon when you can see more hi-res pictures and – even more importantly – read first-hand customer reviews. And please, if you’re buying a bike for your young one, don’t forget to spend ~$40 more (or so) for safety gear. It is a must, it really is. And this is why we wanted to make your life easier and brought you some of the most popular youth dirt bike safety kits along with the recommended bikes.

OK, so let’s discuss those youth bikes for a second. Dirt bikes alone are a great stepping stone between the early wind-whipping thrills of bike riding and the eventual excitement of driving a car, but when you’re talking 125ccs of pure, adrenaline-pumping power, you’re talking the best of both worlds.

Capable of topping out at nearly 65 miles per hour, these bikes offer the ability for somewhat experienced amateurs and well-seasoned riders to drive like the pros across dirt, through mud or even attack asphalt on the wide-open road.

Speaking of the professional world – and the amateur one – there’s a debate going on, as we speak, about which is better, gas-powered bikes or electric ones.

It’s true, electric bikes are quieter, sometimes smoother and much easier to maintain – as long as their battery holds up and their wires don’t wear down – but for the dirt and pit bike purists, it’s all about the combustion engine baby (however, as a note, we must admit that there’s one electric bike that stands out and is a viable alternative, and that’s a Kuberg dirt bike, a model that is called theFreerider).

If you want to simply get from A to B in a somewhat speedy manner, then, by all means, go electric (and read our guide, by the way). But if you want to feel the true power of propulsion and experience the surprisingly rewarding efforts of filling up a gas tank, handling a semi-automatic clutch and, depending on the ride, shifting manually from gear to gear, then gas is the way to go.

At a Glance: The Best 125cc Dirt Bike to Buy

We highly recommend looking at the comparison table we have below where we highlighted the features of each product.

Gas-powered. Check. 125ccs. Check. Now that you know what you want, it’s time to get down to specifics and take a good long look at the 125cc dirt bikes for sale and see how they stack up.

So, without any further ado, the best 125cc pit bikes. 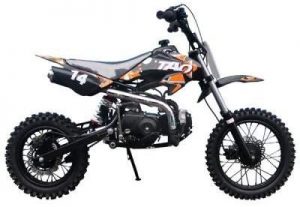 Built around a solid steel back bone, the Taotao DB14 is a 4 stroke, single-cylinder speedster capable of maximum speeds of up to 55 miles per hour – depending on the weight and size of the rider.

A kick start means it’s easy to get going and a 4-up manual transmission, shifted by a foot clutch, means it isn’t exactly for the uninitiated – as shifting can be tricky for those who’ve never done it before. Though, for the less experienced, its front and rear disc brakes, 275mm shock rear and conventional hydraulic front suspension systems help smooth things out and allows you to stop, when required, if you should get into any sticky situations.

Where to buy? Here is a great selection with all colors available. 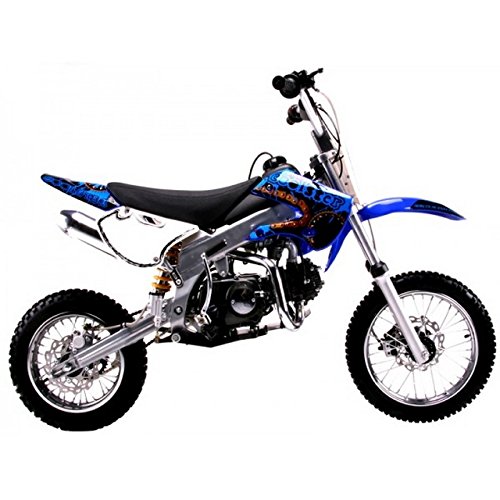 With its sleek style and speedy design, the Coolster 125cc pit bike more than lives up to its name. In fact, its 4-stroke, air-cooled engine is an award winner. (Though a manual clutch means it’s only for those who’re mechanically inclined and know how to manually shift their way out of trouble.)

40 miles per hour maximum speed means it isn’t the fastest dirt bike available, but its reinforced fork tubing and stiffer-than-average heavy duty springs means it can take a beating, time and time again, and keep on spinning, across various terrain.

Safety specifications include a kick start for easing beginnings, front and rear disc brakes for easy stoppage and a custom, tail gripper seat which makes for a less than bumpy ride – if you’re into that kind of thing.

It can hold up to 200 pounds – though the lighter the driver the faster you’ll go – and, for the handy and the brave, its already impressive exhaust can be upgraded with a few twists of the screwdriver, a few turns of a good wrench and some base knowledge of mechanics. Comes (mostly) preassembled. 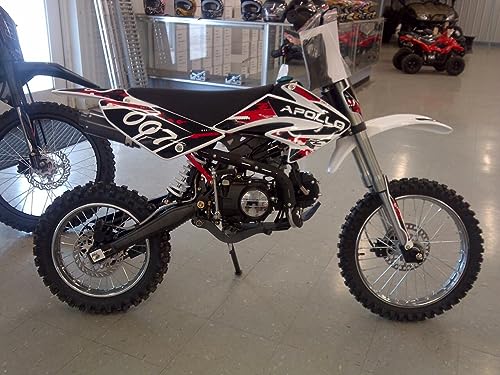 For anyone worried about being too big for  dirt bikes, the Apollo Dirt Bike 125cc is just the size you’ll need, as it comfortably accommodates 5’8 females and six-foot males. And, with a maximum speed of just under 56 miles per hour, powered by 8.2 horses thanks to its four-stroke, single-cylinder engine, you know you’ll be more than satisfied with its power and speed – though, if you’re too big or too tall, that number next to the miles per hour will likely shrink a little bit.

Comes in black and white, has a manual clutch – so, again, it’s not for early riders – and starts with a simple kick.

Safety features are standard, front and rear disc brakes, controlled by the hand and the foot respectively, and comes with a rather hefty 3.5 liter tank. This cool 125cc dirt bike is for riders under 220 pounds. Some assembly is required.

Want to read customer reviews? Use this link to find out. Have fun!