For those in the know, if you’re looking for a fast, fun and exhilarating way to entertain your teens and pre-teens, there’s hardly a better option than a dirt bike. But for those of us who’ve only seen their speed and, dare I say, scariness on display during the X Games and other such high-flying events, there’s a lot to understand.

First of all, there are a variety of different kinds of youth dirt bikes with a handful of different speeds, stylings and safety features.

For example, the 70cc, gas-powered dirt bikes – of which we’ll be reviewing later on – are a few miles-per-hour faster than their 50cc, gas-powered siblings — and quite a bit slower than those seen used in professional events – which puts them in an ideal range for younger riders who want to go fast but require the time, practice and patience to get the hang of things first. 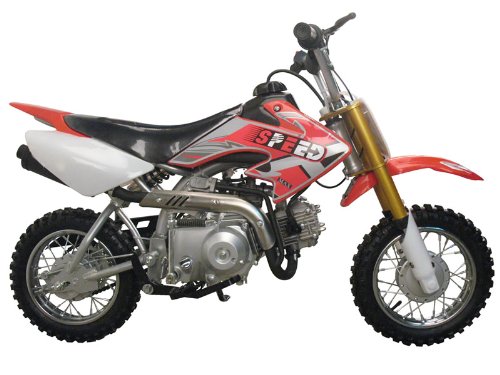 How fast is a 70cc dirt bike, exactly? Well, that depends on a lot of different factors – body type, engine type, components, size, shape, etc. Suffice it to say though, they typically max out between 35 and just under 50 miles per hour – though slower models are available, like the very affordable Coolster Dirt Bike 70cc, found in the four spots at the end of our reviews.

What sets them apart as well as whether they offer an automatic or a semi-automatic gearbox. As the name suggests, automatics do all the gear shifting while semi-automatics require a little extra effort to get things up to speed.

Another popular option for dirt bike buying is to go all-electric. The problem here though is that, while electric dirt bikes are much easier to maintain and much quieter, they hardly offer the same, professional-style experience as their gas-powered compadres. They don’t growl. They hardly rev. They don’t last as long. And they’re often slower.

Not only that, but without oil or gas or anything else found in non-electric engines, there aren’t as many opportunities to teach your young ones about maintenance, upkeep, and the realities of true responsibility. (Something that will pay dividends when they own their own car.)

Now that we’ve covered some of the basics involving dirt bikes, it’s time to put the pedal to the metal and see which 70cc dirt bikes for sale are worth their weight in gas and gold. 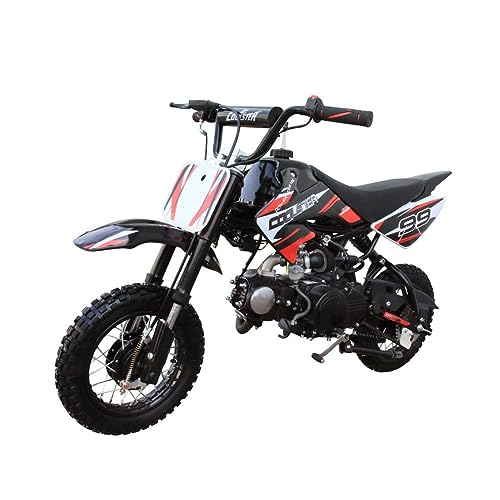 Topping out at just under 35 miles per hour, the Coolster Kids Gas Mini 70cc Dirt Bike isn’t the fastest bike on this list, but with an air-cooled, four-stroke, single-cylinder engine, it more than makes up for it in overall power and acceleration.

And, no worries, for those on edge about revving up a little too quickly or getting out of control, there’s no need to worry as it comes with an array of different safety features, including large disc brakes for easy slowdowns and quick stops, dual inverted hydraulic front and strong rear shock suspensions for smoother riding and larger tires for improved handling.

It starts with a kick and runs on a clutch-less, semi-automatic gearbox for easy shifting and there’s a convenient kill switch right at your fingertips just in case your young one gets into some serious trouble – or just needs an easy way to shut it off. The engine is also built based on Honda technology for heightened performance. For road-ready riders up to 120 pounds. Not for sale in the state of California.

Where to buy it? Here’s a direct link to the product page on Amazon. 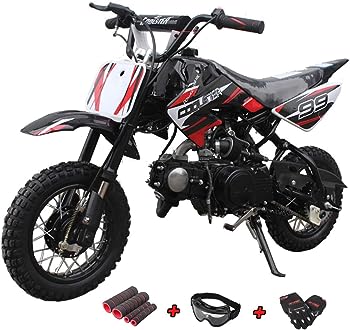 The X-Pro Dirt Pit Bike boasts a clutch-less, 70cc engine with 5.3 horsepower that, thanks to an easy kick-start, makes for a fun-filled, off-road ready ride for both first-time drivers and seasoned trailblazers.

Safety specifications include no-dent polypropylene protection for the fenders and the body, strong steel rims with alloy hubs, dual front shocks, a rear coil-over shock for easy maneuvering and drum brakes on both the rear and front side of the bike.

Its rugged construction, centered by its innovative steel frame, and compact size make it great for young riders and able to withstand both the tests of time and those of riding, through the dirt, mud and uneven terrain.

Holds .97 gallons of gas. Maxes out at around 45 MPH. Comes somewhat pre-assembled – just add the handlebars. Great for 8 to 11 year olds.

Here is a direct link to the X-Pro Dirt Pit Bike 70cc on Amazon. 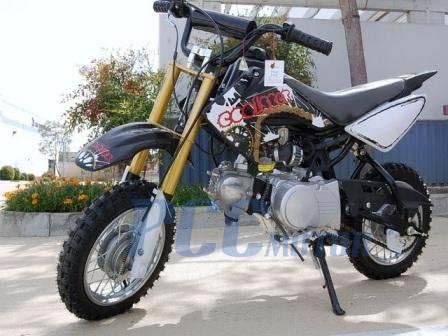 The DB70 Dirt Bike 70cc is technically an 80cc dirt bike – well, 79.5cc to be exact – but, believe it or not, it maxes out at a much slower top-speed, only 23 MPH, than most 70s. That’s why, with its easy-to-operate centrifugal clutch, 2.5 horsepower, twist-and-go throttle, and oversized, super grip tires, it’s a wonderful and nearly risk-free ride most early riders.

It has a sturdy, reinforced frame; rear disc brakes; a fully automatic transmission, and tough, dent-free, polypropylene fenders, as well as a large comfortable seat for a relaxed ride and adjustable handlebars for safer handling.

All in all, the DB70 Dirt Bike 70cc is for the cost-conscious parent who wants their young one to ride on a safer, slower, studier dirt bike.

As always, we’d like to remind you to keep safety in mind. We’ve included a few of the best-selling safety kits to save you some time. Here go our top picks.